Rain-gardens are now well-established components in the tool-kit of low impact urban design treatment devices for stormwater and runoff, both for the attenuation of flows and the filtration of sediments and metal contaminants. In common with any other device, the quality of performance of a rain-garden will depend on both its quality of design and on the quality of its maintenance. Rain-garden Maintenance Guidelines have been developed to provide an introduction to rain-garden maintenance, with a suggested maintenance schedule and short troubleshooting section. 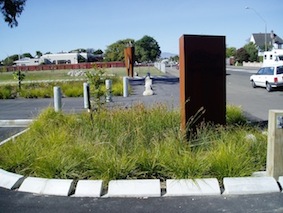 A rain-garden is a relatively complex treatment device that requires appropriate operation and maintenance to avoid significantly shortening its effective life or compromising its design effectiveness. Compacted or litter-choked filter layers, blocked outlet pipes, scour around inlet pipes, hard-panning and weeds will all reduce the usefulness of the rain-garden as a treatment device. They will also greatly devalue the visual amenity of the features, which is usually a significant consideration for their design and installation.

A recent example of innovative management and treatment of stormwater is the Wellington Quays rain gardens, where a series of rain gardens along one of Wellington’s busiest arterial routes catches stormwater runoff from the roads and pavements and improves water quality by passing it through natural filtering functions before it is discharged to the harbour.

A decision to plant a line of trees along a six-lane arterial road carrying 50,000+ cars a day, provided an opportunity to install rain gardens. Meeting both the requirement for a suitable environment for tree growth and maintaining the structural integrity of the road required an innovative solution that was cost effective and buildable within the constrained road environment.

The rain gardens improve water quality by removing bacteria, trace metals and sediment from the stormwater runoff, but also offer additional benefits such as wildlife habitat and aesthetic improvement, as well as being an important element in sustainable urban drainage. The project has also delivered valuable lessons in the design, location and installation of rain gardens that have contributed to a set of design principles for future reference. See case study report. See photos.

The Waitangi Park case study shows the response of Wellington City Council to complex stormwater issues in the design of the waterfront between Te Papa and Mt Victoria in the inner city area. This is an internationally recognised and acclaimed response to urban stormwater management demands.

Waitangi Park is Wellington’s newest, most exciting, urban park, covering some 3 hectares of the waterfront. The park has won international and national landscape design and architecture awards that recognise its sustainable, ecological and social attributes and its sophisticated design.

The park is named after the Waitangi Lagoon that existed nearby until the mid-19th century. Fed by the Waitangi Stream, it was an important food source for local Maori, but largely disappeared after the huge 1855 earthquake lifted all the land in this area. Waitangi Stream was piped during construction of the city’s earliest urban stormwater system, from 1859 onwards.

Urban stormwater quality can be influenced by the condition of the wastewater assets within the catchment and other contaminants including nutrients, sediment, heavy metals and hydrocarbons. The build-up of heavy metals and hydrocarbons in the marine sediments in the vicinity of the stormwater outfall has been a concern for many years. One of Wellington’s largest urban stormwater catchments drains into the harbour through a culvert that runs through Waitangi Park. The 448 ha catchment, of which 262 ha is impervious, includes the suburbs of Mt Victoria, Newtown and Mt Cook.

To respond to these quality concerns, stormwater from the culvert is ‘daylighted’ via a pumping system about 100m upstream of the park. The pump has been linked to waterlevel and salinity sensors to exclude seawater at high tide. The stormwater then enters a sub-surface wetland designed to reduce turbidity in the stormwater to levels suitable for UV disinfection (<10-15mg/L) and to remove grease, solids and silts. Disinfection of flows prior to entering the wetland results in 90-99% reduction in bacterial levels (faecal coliforms). Flows within the Waitangi Park wetland are treated through filtration, absorption and biological/chemical transformation. Treated stormwater from the wetland is used to irrigate the park and the neighbouring grounds of Te Papa (National Museum of New Zealand).

As well as the wetlands, a series of ‘planters’ around the park catch stormwater runoff from the roads and pavements, clearing away most pollutants before they reach the stormwater culvert.

Chemical water quality monitoring is undertaken biannually at two sites: one from the culvert upstream of the diversion pump and a second in the wetlands stream. It is intended to monitor the sub-surface wetlands to detect changes in sediment and heavy metal concentrations temporally and spatially to identify long-term trends and maintenance requirements. Test results show a significant improvement between the culvert sample and the wetland sample. Annual median faecal coliform values reduced from 920 cfu/100ml at the culvert to 20 cfu/100ml in the wetland. The 75-percentile value declines from 5500 to 466 cfu/100ml between the same sample sites.

The wetlands are a practical means of addressing ecological and cultural concerns relating to stormwater management. The subsurface and UV treatment significantly improve water quality by removing bacteria, trace metals and sediment from the stormwater. Although the quantity of water being treated is small compared to the overall flows through the culvert, it is a means by which the public awareness is raised and can be considered educational. The urban green spaces and wetlands also offer other ancillary benefits, such as wildlife habitat and aesthetic benefits as well as being an important element in sustainable urban drainage and in encouraging biodiversity.

Research on the performance of these devices was reported in full in NZTA Research Report 493. A programme of field trials evaluated the performance of a Hynds Upflo, Humes Filternator and Stormwater 360 Stormfilter in field conditions against the performance efficiencies claimed for each device by the manufacturer. This was not a comparison of devices operating in the same conditions in the same time and place, so monitoring additional ‘control’ devices was not considered beneficial in developing the scope of the research.

The research programme extended from September 2010 to March 2012 and met the Auckland Council protocol requirement that testing extend over 15 storm events.

The findings show that performance targets for treatment devices are probably meaningless, certainly inappropriate and possibly unachievable unless they recognise the specific character of influent concentrations and particle size, and the whole treatment function. The mean of treatment of TSS by the devices (against the efficiency claimed from US studies) was generally disappointing. There were extreme variations and only the Filternator met claimed efficiency within the sampled range.

Stormwater influent was bypassing the treatment devices in 50% of events and all devices performed poorly in treating dissolved metals, with levels in effluent often higher than the corresponding influent, and dissolved zinc levels generally being in excess of recommended levels in water quality guidelines. The frequency of bypassing suggests the sizing methodology for such devices should be reviewed using New Zealand data, rather than data drawn from the US Northwest, for design storm limits. This could address both the issue of bypassing and the issue of re-suspension of settled material in subsequent events.

Treatment techniques and devices were discussed in detail in the March 2008 workshops, with extensive illustrative examples of vegetative and non-vegetative responses. An extensive library of case studies in approaches to stormwater treatment has been developed through the LIUDD Research Programme and can be accessed by the external link to The Case Study Portal at Urban Design + Development.