Summaries of recent AMIG decisions are listed below. This listing does not include recommendations to the TCD Steering Group.

A platform is required for a cycle crossing. If the crossing cannot be installed on a platform, it should not be installed. Blocks of green, rather than a continuous green lane across the road should be used to avoid giving visual cues that encourage unsafe behaviour by cyclists entering the crossing. Green blocks used across vehicle entrances on cycle paths have been shown to be effective in slowing cyclists and encouraging caution. (May 2018)

A “Pass with care” cyclist symbol (duplicated at reduced scale to indicate a child cyclist) superimposed on a car beneath a 30 kmph roundel is endorsed for adoption by the TCD Steering Group as the threshold sign for any 30 kmph low volume share road space meeting the criteria for marking Sharrows, as it gives a stronger and clearer visual cue for the desired behaviour. (May 2018) 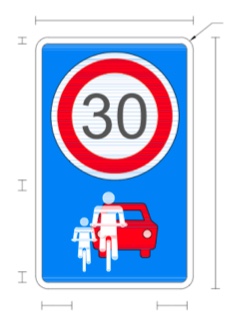 The TCD Steering Group has not accepted this recommendation and requires more information on why available signage does not deliver the message or desired behaviour and whether the sign is nationally applicable, or an application to undertake a trial of the proposed threshold sign in accordance with TN10. (Aug. 2018)

Where an advanced warning of a road crossing is considered necessary, an approved sign [marking] should be used, such as the GW triangle, to provide such warning. (Feb. 2018)

Design pressure to make a separated cycle path a shared path, especially at signalised intersections, by pushing cyclists on to the footpaths rather than keeping the separation at the signals, requiring an extra lane on the road, is poor practice that delivers a reduced level of service for both cyclists and other footpath users, and should be adopted only as a last resort. In all cases, a separated facility should not abruptly become a shared space without good reason. (Oct. 2017)

The concept of a buffer to reinforce an ASB is partly in response to claims that an ASB puts the cyclist in a truck driver’s blind spot. It is the inherent fault in HV design that tolerates such an extensive hazard from poor visibility from the cab, which could readily be addressed by blind spot cameras. Adding an effective buffer distance would require 7m for an ASB. This would almost inevitably provoke motorists and prove counter-productive for cyclists. Extending the spatial demand for an ASB by adding a buffer zone behind it was not an appropriate response to the issue of poor road visibility from the cabs of heavy vehicles. (Oct. 2017)

An ASB of 4.5 – 5.0m with a buffer of 1.0 – 1.5m is proposed for trial for high freight routes, with the green marked only on the forward 3.5m in the ASB and no white line marked until the limit line at the back of the buffer, to assess the effect on vehicle encroachment. (Feb. 2018)

Shifting the cycle lane symbol (with the green surface, where used) 300mm further out from the parking lane line uses behavioural nudging to move cyclists into a slightly safer line of travel along the cycle lane. (Oct. 2017)

The appropriate width for a ‘virtual buffer’ beside the parking lane alongside a cycle lane is one third of the cycling lane width. This creates a consequential need for the M-2 cycle symbol to be marked off-centre in the cycle lane and placed nearer the outer edge of the lane (Feb. 2018) or further from the door-zone. (May 2018)

COPTTM: Use of Sharrow Marking

If the recommended conditions within the guidelines for use of the sharrow marking, including a 30 kmph speed limit and reduced lane widths, are met, then it would be an appropriate use of the marking for TTM on long-term work projects. (Jul. 2017)

Advisory speed markings have proven ineffective in Australia, while the use of green stripes has been effective in slowing cyclists in NZ. Use of an advisory speed marking is not supported for shared paths in New Zealand. Although the Austroads behaviour markings are not as clear in their message as might be wished for in places and could suggest less desirable behaviour (the cyclist appears to be shouting at the pedestrian), the Austroads markings have been installed by Nelson City and Christchurch City and a consistent national approach should be encouraged. The Austroads shared path behaviour markings will be used in New Zealand. (Jul. 2017)

The new Austroads guidance for bollards to be 1.4 to 1.6 m apart, if applied on a wider path, can result in four bollards dividing the path into three. A central gap between bollards generally leads to confusion and conflict, and it would be better to narrow the path and use a central bollard, even if the gap between bollards increased to 1.8 m, as even at 1.8 m very few cars could pass. (Jul. 2017)

“Cyclists may use full lane” Signage

Such a sign does not accord with the current rules and addresses the same need that has been addressed by the Sharrow marking. The Sharrow is to be used to indicate situations where it is appropriate for cyclists to use the lane. (Aug. 2016)

Estimated time to destination is able to be shown on cycling wayfinding signage under Austroads NT1988. This presents a variety of practical challenges: times tend to be estimated at an average speed of 15kmph, but this can vary greatly according to the number of interruptions in the journey and variables like gradient, surface and weather. Inclusion of times on directional signage was opposed when the Manual of Cycling Signage (based on Austroads) was developed by Christchurch, and this has been adopted as the national standard. AMIG supports adoption of Austroads wayfinding signage allowing use of time to destination as an available alternative for signs. (May 2016)

In situations where cyclists constitute a hazard or would be at greater risk, it would be preferable to use supplementary signage with PW35 to indicate the specific hazard, such as ‘touring’, ‘training’, ‘crossing’, ‘school’ or ‘next X Km’. (Feb. 2016)